“Which Saint are you going to choose for your Confirmation?” It’s a question I heard about as frequently as “What are you going to be when you grow up?” The dreaming, the imagining and the pressure was pretty much the same for both questions.

I always thought I would choose St. Elizabeth Ann Seton. Elizabeth is a pretty name, I thought. And living in Maryland, I remember the time my parents took me to Emmitsburg to see her shrine. 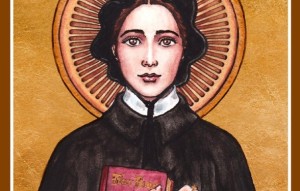 St. Agnes was a favorite of mine as well. Patron saint of girls? I’m a girl, so that’s cool. She was always a favorite. The martyrs are all inspiring.

Finally, push came to shove and 7th grade came around. I had to make a decision. “No, you can’t just pick a pretty name,” my teacher said. “You have to pick a saint whose example means something to you. Which saint lived a life that you would like to imitate?”

Well, now things changed. St. Elizabeth became a nun. I did not want to be a nun, at least not yet in my life. In fact, I decided right then and there to rule out every female saint that was a nun, which seemed like 90% of them. The mothering ones didn’t quite appeal to me either. That narrowed it down to the early martyrs and a handful of others, including:

That’s it! That’s the one! There’s an adventure story if you ever heard one. God told her to put on men’s clothes and lead the French army to victory, which ultimately led to a martyr’s death by burning, all the while fixing her eyes on the crucifix and calling out the name of Jesus.

I always had a sense that someday there would be some sort of revolution or underground movement, or that Christianity would go underground (like the early days), and I would be heavily involved as a leader. More childish nonsense, perhaps. But it lasted the whole of my childhood, and St. Joan of Arc fit that narrative.

Did I imitate this saint’s path to holiness, like my religion teacher said I should? Looking back at the last few decades, I might not be much of an underground leader, but I’ve definitely gone against the grain. I still love that I chose St. Joan of Arc because her attitude of “who cares what society thinks” has been a big inspiration for me. Maybe the Holy Spirit was guiding me there, knowing that I would soon face a lot of things that would set me apart. As much as I love her, I’m ashamed to say I don’t ask her intercession nearly as often as I should. I’m trying to get better at that so she’ll know me when we meet in heaven.

Who did you pick for your Confirmation saint, and why? Are you still happy with your choice? Do you talk to them much?

connieann Catholic. Historian. Works in Advertising. I love travel, cooking, reading, movies, occasional bad TV, and writing about it all. :)
Published May 9, 2015May 1, 2015

5 thoughts on “My Patron Saint”