Tales from the Valley

"Not all those who wander are lost"- J.R.R. Tolkien

Of all the saints who have ever helped me along my journey, I have yet to find one who writes as beautifully on the topic of infertility as St. Josemaria Escriva. 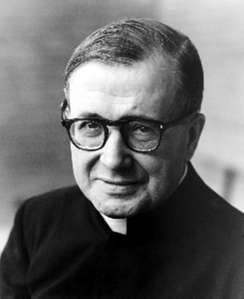 If you’re a St. Josemaria lover or an infertility junkie, you may have already seen his most well known quote on the subject:

It’s a beautiful quote. I’ve seen it before. And I love it, I really do. You could meditate for hours on it and still not really reach the end of it. But this isn’t the only thing he’s ever said on the subject.

Recently, I was looking for this quote, and the magic of Google brought me to a larger passage of St. Josemaria’s. Someone had asked the question:

“The frustration caused by not being able to have children, leads, at times, to discord and misunderstanding. In your opinion, what meaning should Christian couples who are childless give to their married life?”

The Saint’s answer was brilliant. Here’s what I considered to be the highlights:

“Often God does not give children because He is asking them for something more. ….

There is, then, no reason for feeling they are failures …..

If the married couple have interior life, they will understand that God is urging them to make their lives a generous Christian service, a different apostolate from the one they would have fulfilled with their children, but an equally marvelous one…

God, who always rewards, will fill with a deep joy those souls who have had the generous humility of not thinking of themselves.”

I read this, and I was stunned. Thrilled. Overjoyed. Finally, there was someone (a Saint even!) boldly proclaiming the truth:

Marriage is holy, in and of itself. Even if God doesn’t give you children.

(If you want, you can read the whole thing here. Scroll down to number 8.)

As Catholics, we often think that we are failures if our families don’t include many children, running around and singing in matching outfits on an Austrian hillside. That not having several children means that we are less loved by God. That our marriage is worthless. But that’s a lie.

What matters is your daily living of your marriage vows— your daily “I do” to your spouse and to God.

Marriage is a vocation, a call from God, and “the vocation to love is in fact a vocation to the gift of self, and this is a possibility that no physical condition can prevent.” (That’s Pope B-16 for the win, by the way).

“…a different apostolate… but an equally marvelous one.”

Marriage is a path to holiness. And guess what? Everyone’s path is going to be unique.

This is the message that I’ve felt in my heart for a while now (ever since we felt God asking us to set aside our adoption plans), but finally they come out of the mouth of a Saint.

If I had read these words two years ago, I would have hated them. I would have felt my chest and shoulders tightening up and my eyes getting blurry. I would have thrown my computer. I’ve done that before.

I was so wounded and full of grief that I couldn’t have recognized the Lord even if he stood in front of me.

21 Since my heart was embittered
and my soul deeply wounded,
22 I was stupid and could not understand;
I was like a brute beast in your presence

I’ve learned that I’m not bound to procure children at any cost. If God’s plan means I’m not going to be a mother, it’s ok, because it’s not about here – it’s about heaven.

But what if you’re not there yet?

I shared the passage from St. Josemaria with a secret Facebook group of Catholic women dealing with infertility, and while many were just as excited as I was, some of the members had a less favorable take:

“This quote would only be helpful if I knew for certain that I would never have a baby. Then I could pick up and move on.”

This really summarizes our initial gut reaction for most crosses, doesn’t it? “If I knew for sure what the outcome would be, then I could get on with my life.”

Have you ever found yourself saying something like that? I sure have. It’s understandable, for sure. After all, we’re all human. We crave stability and certainty. But here’s the thing about the cross:

There is no human certainty in it. There never is.

Jesus isn’t asking you or me to reach a point where we feel safe and sure, and THEN pick up our cross. It can’t work that way – it doesn’t make sense. Instead, Jesus is saying, “Take up your cross and follow me.” He wants us to trust him.

He’s not going to give us the details in advance. Maybe because it would make things too easy. Or maybe it’s the opposite. Maybe if he let us see all of the pain up ahead before we’ve built up the soul-muscles to handle it, we’d quit before we even tried.

At the end of the day maybe faith is about learning to embrace the cross in the midst of all the uncertainty and instability and specters of hope. Maybe it’s about learning what “hope” truly means, and discovering that as much as we desperately want “x”, there is a wound in our souls even deeper, that requires something even more, that Jesus alone can satisfy.

And that’s where our certainty comes from, isn’t it?

That’s where our assurance lies: in Christ, who loves us deeply, knows us intimately, and is always at our side.

“Do not focus so much on the path, but on the One who guides you, and to the heavenly home to which he is guiding you” – St. Padre Pio